New images shared on Twitter allegedly showcase upcoming cases from Apple for the iPhone 14 lineup expected to be announced this Wednesday.

The images, shared by Majin Bu, include both leather and silicone case options for all the expected ‌iPhone 14‌ models. While the photos claim to show official cases from Apple, they’re most likely fake cases that resemble accurate colors. Apple often updates its selection of cases alongside a new iPhone release, so some new colors are expected this week.

According to the post, leather cases for the ‌iPhone 14‌ series will be available in bright orange, brown, golden brown, midnight blue, black, and “fir green.” If the colors are accurate, several currently available leather case colors from Apple will be discontinued, including a lighter purple named Wisteria, Sequoia Green, and Dark Cherry. While the colors shown in the images are possibly legitimate, the names may not be, so take them with a grain of salt. 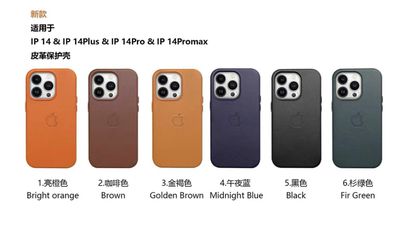 For silicone cases, another image shared shows eight colors, including midnight, succulent, chalk pink, red, lilac, sun glow, stromblue, and elderberry. The names are claimed to be official Apple names for the colors, but the information’s source has been wrong in the past.