Ahead of the release of one of the most anticipated films Brahmastra, the makers of the movie organized a special screening on Thursday. The special screening was attended by Ranbir Kapoor, Alia Bhatt, Ayan Mukerji and Alia’s sister Shaheen Bhatt, her father and filmmaker Mahesh Bhatt. Others who attended the event included Shanaya Kapoor, Randeep Hooda and others. After the screening, fans rushed to social media to give their verdict. They even said that the Ayan Mukerji’s film has ‘created landmark moments in Indian cinema’.
A fan tweeted, “The #AyanMukerji directorial #Brahmastra has created landmark moments in Indian cinema. It manages to bring you into a different world through its MAGNIFICENT VISUALS.The plot engages you right from the get go to surprising climax”. Another user wrote, “Good…#RanbirKapoor & #AliaBhatt Were Good With A Terrific Chemistry…Supporting Cast were apt & terrific…BGM…Cinematography & VFX Works…Story is Decent & Screenplay Is Racy “. Some also called it a ‘must-watch’. Similar tweets flooded social media.
Read some of the tweets here: 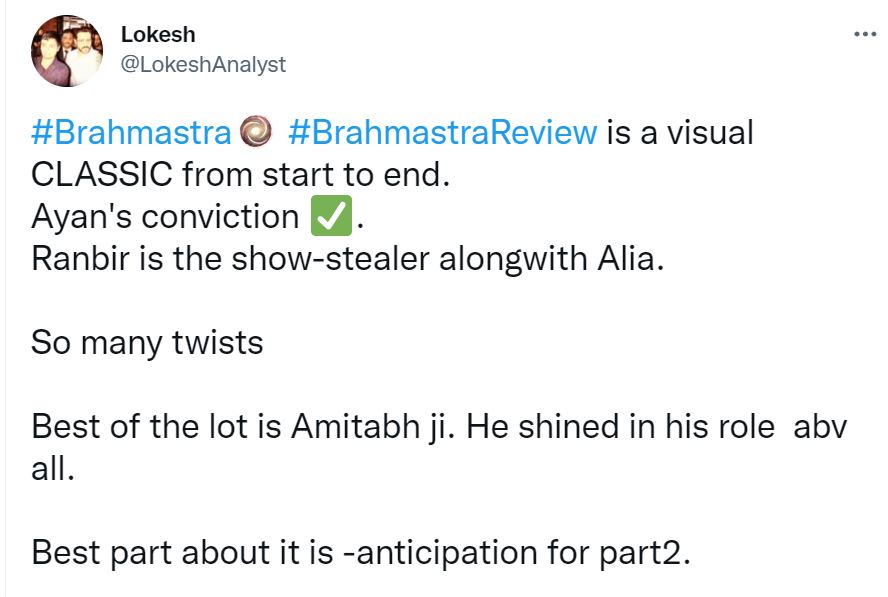 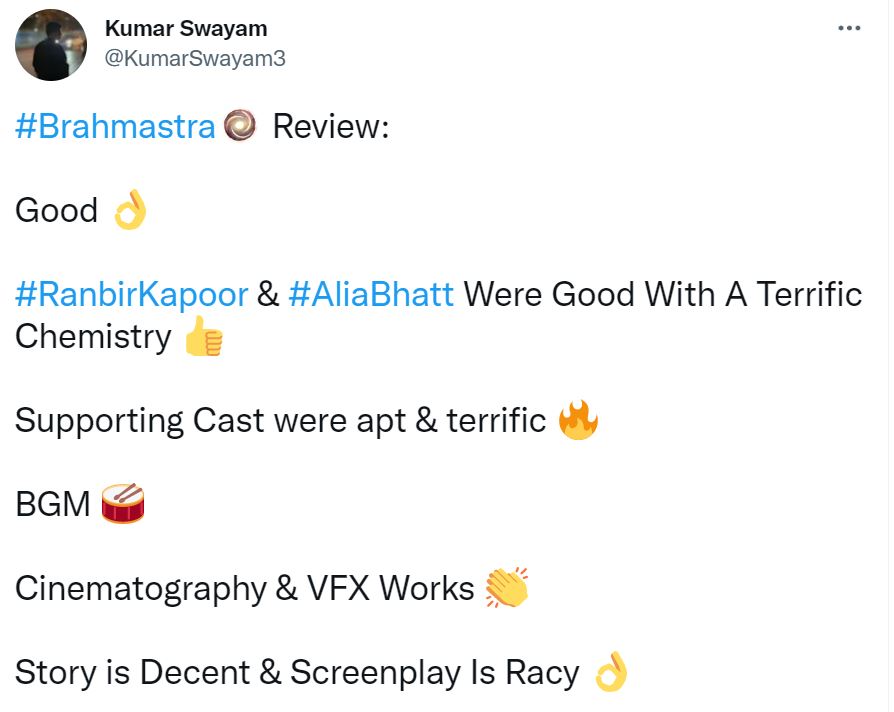 Brahmastra is directed by Ayan Mukerji and is scheduled to hit the theaters in four other languages ​​– Tamil, Telugu, Kannada, and Malayalam. Apart from Alia Bhatt and Ranbir Kapoor, Brahmastra: Part One– Shiva also features Amitabh Bachchan, Mouni Roy, and Nagarjuna Akkineni in pivotal roles. The film is intended to serve as the first film in a planned trilogy as part of its own cinematic universe called Astraverse. Shah Rukh Khan will also be making a special appearance in Ranbir-Alia’s film and will be essaying the role of ‘Vanar Astra.’
Brahmastra: Part One– Shiva is bankrolled by Star Studios, Dharma Productions, Prime Focus, and Starlight Pictures. It is one of the most expensive Indian films to date and has reportedly been produced on a budget of over Rs 400 crore.