Qualcomm officially unveiled the Snapdragon 8 Gen 2 chipset earlier today. After the announcement, the upcoming Galaxy S23 Ultra popped up in the online benchmark Geekbench again. More specifically, the European Galaxy S23 Ultra variant carrying model number SM-S918B showed up in the benchmark browser, complementing the US variant that was spotted in Geekbench last month. And just like the variants for the United States, the European model is powered by the Qualcomm-made Snapdragon 8 Gen 2 rather than an Exynos chipset.

The online benchmark reveals that the European Galaxy S23 Ultra tested today has the same motherboard designation, “kalama,” as the US variant, which virtually confirms that the phone will hit the shelves in Europe carrying the Snapdragon 8 Gen 2 SoC. Other details revealed by the benchmark include 8GB of RAM (although more RAM options are expected) and Android 13, which is pretty much a given, considering that Samsung is already rolling out the update to its 2022 and older Galaxy S flagships.

Next year, it’s Snapdragon for all!

If you’re wondering, the Galaxy S23 Ultra scores 1,504 and 4,580 points in single-core and multi-core tests, respectively. However, we don’t recommend putting too much weight on these scores. It should go without saying that these results were achieved on a pre-release Galaxy S23 Ultra, which means that the phone could yield different — presumably higher — benchmark scores once it’s ready to hit the market.

In fact, the Galaxy S23 series might even be powered by a highly-optimized version of the Snapdragon 8 Gen 2, possibly boasting better performance. This characteristic could be unique to the 2023 Samsung flagships, which might allow the company to really give its competition a run for its money.

Samsung might unveil the Galaxy S23 in early January or the first week of February. Availability details are not publicly known just yet, but the flagship should hit the market relatively soon. Either way, if the Galaxy S23 series is powered exclusively by Qualcomm, and it looks like it is, it will be interesting to see what will happen to Exynos. Samsung might be buying some time to develop a new and better Exynos flagship chipset for future use, or it might lower its expectations and use the Exynos line to supply other smartphone makers with mobile SoCs for mid-range devices. Time will tell. 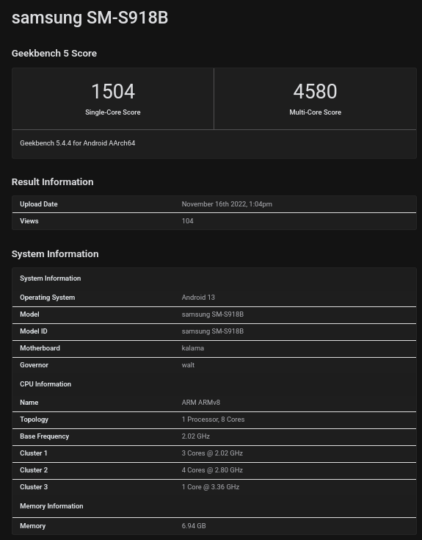