A 79-year-old Japanese man got a 90-inch skipping rope stuck in his bladder after inserting it through his penis, in what one medic described as the most ‘extreme’ case they had ever seen.

Shocking scans published by his doctors show how the over-two-metre thin rope — which did not have handles — had become tightly coiled inside the unidentified man’s bladder.

This made it impossible for medics to pull it out the way it came in so they had to cut into his bladder to surgically extract it.

The man did not tell doctors why he had inserted the rope but putting objects into the opening of the penis is a risky sexual act known as sounding.

Medics used information from detailed scans to create a 3D computer model of the tangled rope to determine the best method of removal.

A UK-expert said it was one of the most ‘extreme’ cases of an object being inserted into the body via the penis he has heard of in his career, which has spanned two decades. 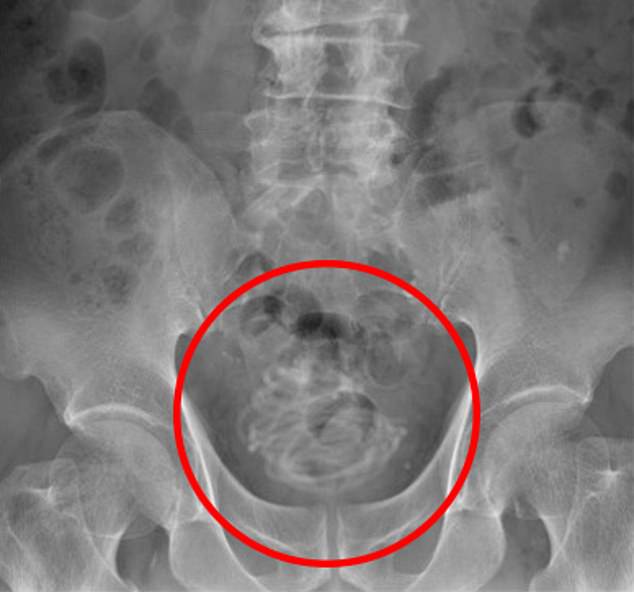 What is sounding? And why can it be dangerous?

Sounding is when men insert items into the opening of the penis to enhance their sexual pleasure.

It usually involves specially designed tools made from glass or metal.

Men interested in the practice should understand the risks and purchase equipment from reputable businesses and ensure they do it hygienically.

But they warned the practice can damage the sensitive tissue in the urethral pathway, which releases urine and sperm.

It can also lead to a lack of bladder control and infection.

And the penis and urethra may even require surgery or implants to rebuild sensitive tissue.

Experts from Dokkyo Medical University in the town of Mibu, 100km north of Tokyo, detailed the incident in a medical case report.

The elderly man originally attended the university’s medical centre complaining of dysuria, a painful or burning sensation when urinating.

When medics investigated his bladder using an ultra sound scan they found ‘a large object accompanied by acoustic shadows’ was inside the bladder. An X-ray then revealed this object was ‘a wire-like coiled foreign body’.

The man was then forced to admit to doctors that he had inserted a skipping rope into the urethra of the penis. Medics did not state if the man explained why he had undertaken the bizarre act.

Lead author of the case report, published in the journal Urology Case Reports,  urologist Professor Toshiki Kijima, said medics then performed a CT scan to determine how best to remove the rope.

He said they then used a computer programme to generate a 3D reconstruction of the rope which showed it had become too entangled to pull it back out through the penis.

The rope got entangled as the bladder contracted, a natural process that occurs after it expels stored urine.

‘Transurethral extraction was difficult considering the length of the rope and its entanglement in the bladder,’ Professor Kijima said.

‘However, wires inserted into the bladder usually curl up as the bladder contracts; therefore, special consideration is required for wire-like foreign bodies.’

This forced medics to surgically remove the rope directly through a small incision cutting into the man’s abdomen and then pulling it out of the bladder in its entirety.

They said by removing it this way they avoided potentially damaging his urethra or bladder through pulling the tangled cord forcefully out of his penis.

The man went on to enjoy a complete recovery with no ongoing complications from the insertion, or the surgery itself.

In their report, the medics said the case demonstrated the ‘invaluable’ usefulness of using 3D reconstructions to determine how best to remove objects that had been inserted into the bladder.

‘Any handling of the foreign body should be avoided until the precise materials, size, form, and position are determined because it can cause further urethral injury,’ he said.

Professor Giulio Garaffa, an uro-andrologist at the private men’s health clinic International Andrology in London, told MailOnline this case was one of the most ‘extreme’ cases of a urethral insertion he had heard of.

‘In my 20 years’ experience in this field I have encountered a number of patients attending A&E who perform this practice and use all sorts of objects that are thin enough to pass through the urethra. However, a 230cm length object has to be one of the most extreme cases,’ he said.

He added that the man was lucky to have avoided some of the potential complications from such an insertion.

‘He was no doubt very lucky to have escaped some more serious complications such as an infection,’ he said.

‘When you introduce anything inside your body that is not sterile, you can cause a tissue infection and these infections can sometimes be very serious and can for example lead to tissue necrosis or even sepsis.’

The insertion of objects into the opening of the penis for sexual pleasure is known as sounding, which carries multiple risks.

More serious complications, such as a hole appearing in the bladder, and scarring of the tube that carries urine out of the body can require major reconstructive surgery.

UK experts have previously reported a rise in the number of men having sounding issues over the past few years.

Other known reasons for the insertion of objects into the urethra can include mental health problems as well as extremely ill-advised DIY attempts to cure problems with urinating or maintaining an erection.

Patients who have a object stuck inside their penis are usually hesitant to contact a doctor due to feelings of guilt or embarrassment, that can lead to further medical problems.