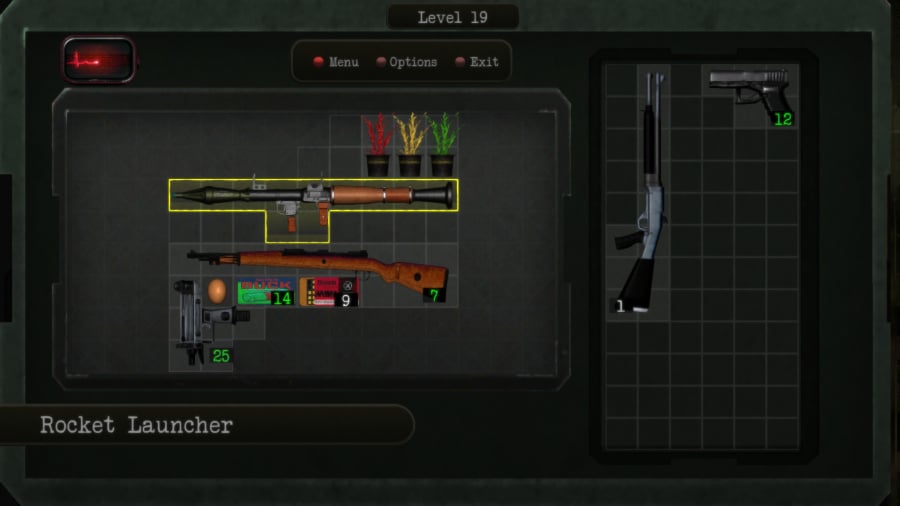 Considering just how beloved the inventory management of Resident Evil 4 was, it’s insane to think it’s taken this long for someone to spin it out into a full game. 17 years later, Save Room is a completely faithful recreation of the enjoyable Tetris-like mechanic that works as a neat distraction for an hour or two.

This is the exact same inventory sorting mechanic you remember from the PS2 days; with an Attache Case in the middle of the screen housing only so many slots, you need to find a way to fit all the items inside. It starts off basic, having you rotate guns and ammunition until they all fit snugly inside. However, the game quickly introduces herbs, the health meter, and item combinations for some depth.

Complications are therefore sourced from how you’ll first use the items to restore health, and then fit the remaining ones around the case’s limited slots. Some weapons will then need to be loaded with bullets — thus cutting down on the items you need to store — and any ammo left over can be stacked on top of each other to lessen the burden. Across 40 levels, you’ll arrange these items into order across varying degrees of complexity.

It’s a fun novelty that’s going to appeal to Resident Evil 4 fans and anyone who particularly enjoys sorting things — plus, there’s an easy Platinum Trophy. The difficulty curve makes some levels harder than others, though, as you can go from one puzzle that takes just a few minutes to figure out to another that tests you for a good half an hour. However, with an uneven curve, waiting for you on the other side could be a few more simple brainteasers. It just feels a bit disjointed sometimes.

The controls are another small annoyance, with slow and fiddly directional options that make scrolling through the Attache Case take too long. There’s a toggle button between the case itself and where your external inventory is housed, but it’s not enough to make for a smooth control scheme.

Small frustrations aside, Save Room achieves exactly wanted it to do: create a faithful game based on the inventory management of Resident Evil 4. You need to have some love for the feature to get anything out of Save Room, but for those who do, it’s an enjoyable enough experience.