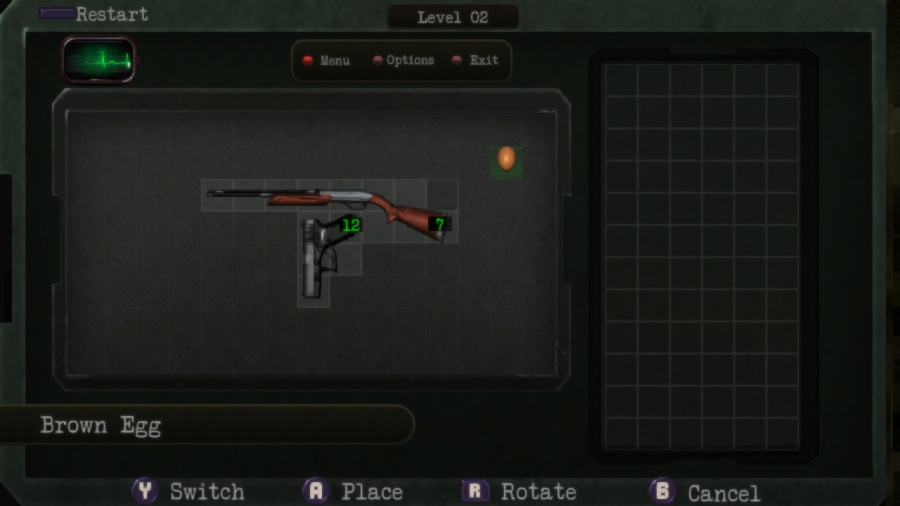 Ever thought inventory management in 2005’s Resident Evil 4 is like a game in its own right? Well, in the internet age, everything happens eventually, so here’s that game. In Save Room from Fractal Projects, you have a limited and specifically shaped inventory space on the left and a load of guns and stuff on the right. Simply slot the guns into the space, like a military tangram puzzle.

You also need to ensure your health meter is full and your guns are loaded at the end of the stage. Easy: eat the bad stuff then eat the healing stuff; if a gun needs ammo, put the ammo in it. You may need to combine herbs or gunpowders first, but it’s all monkey-trainable stuff. Once thus pared down, simply slot the guns and herbs into the space, like a drug dealer’s jigsaw.

The play in the interface is so-so. Tapping around with a d-pad can be fun: anyone who’s ever rhythmically blasted around the Street Fighter 2 roster knows that; anyone who’s ever excitedly jingled a rude name in for Link knows that. But here, the reset option is dangerously proximal and the focus-switch button is irritatingly half-helpful. We’ll nit-pick because there’s not much else to the game: simply slot the guns and herbs and sardines into the space, like Marie Kondo’s saferoom pantry.

The one-joke sparsity of the game is partly concealed by its brevity. 40 stages took us an hour and a bit, with only a handful of them requiring serious application. The credits provided almost as much entertainment, being a simple list of graphical asset sources. There’s a section titled “Egg”, where the part of Egg is played by “‘Egg’ by Thunder”. Truly up there with the Flugelhorn credit in Far: Lone Sails in the Slightly-Interesting-Credits Hall of Fame. It’s a critical role, too, in a game where you simply slot the guns and herbs and sardines and eggs into the space, like a killer chef’s Tetris omelette.

Save Room starts from the premise that Resident Evil 4’s inventory management system might work as a full game. It left us thinking that Save Room might work as an inventory management system. It may have gone down well on Steam, where it is a couple of your local currency units cheaper, but there’s just so little here that it’s hard to recommend. You simply slot the stuff into the thing – there’s only so many ways you can say it.