What should you look for when buying a classic car? Scarcity and legitimate provenance are obviously key factors. But there’s something else much more important. “Buy the one you always wanted,” says Iain Tyrrell, the Chester-based oracle of classic cars. Iain presents his Tyrrell’s YouTube show Classic Workshop while leaning over a magnificent V12 engine – checking one cylinder’s sound against another at his workshop. “There is too much focus on investment. Obviously, do your internet research, select the model and get specialist appraisal from a classic-car expert. But do not let your head rule your heart; every purchase should be 50 per cent head and 50 per cent heart.”

I could fall for any one of the cars photographed for these pages at this year’s Goodwood Revival, but if you put me on the spot, the BMW 3.0 CS coupé is a wonderful starting point. Gracious and lithe, it really is a BMW and not one of the ’60s Italian rarities designed by a coachbuilder like Carrozzeria Scaglietti. The BMW 3.0 CS coupé, or E9 Clubsport, is one of the most elegantly formed two-door coupés that BMW has ever made. Its designers Wilhelm Hofmeister and Manfred Rennen drew inspiration from the Giorgetto Giugiaro-designed 3200 CS. The 3.0 CS’s bodywork was built by Karmann and spawned the lightweight CSL road and highly successful CSL race-prepared version. The CS coupé’s six-cylinder M30 engine produces 180hp, rising to 200hp in the CSi. A BMW expert should search for blown gaskets leading to head cracks. All the suspension’s struts and bushes may need replacing as well. If it feels sluggish to drive, then a worn camshaft could be the culprit. Check the complex braking system, and for oil leaks and rust. Today a nicely preserved 3.0 CS coupé will fetch around £120,000. If you are seduced by the looks and image, a lesser 2.5 CS coupé can be had for around £50,000.

“The classic-car market is fickle,” explains Tyrrell. “One minute a star is driving an MGB in a Hollywood movie and everyone wants one. Cars come in and out of favour.” He stresses that a car with flair and beauty makes a good choice but holds a firm view on oddball creations. “Quirky cars can be a double-edged sword.” So what would Tyrell suggest as a great first classic that will be pretty reliable? “A Porsche 911 holds a lot of appeal. Parts are easy to get hold of and the car should rarely go down in value.”

Perhaps you’re keen on a sprinkling of spellbinding beauty? Consider Maserati’s Ghibli coupé, which takes its name from an Egyptian desert wind. The 15.4ft Ghibli and Ghibli SS were produced between 1967 to 1972 and again designed by Giorgetto Giugiaro. What we have here is a two-door, 2+2 coupé powered by a 4,719cc V8, producing 330hp – or 5hp more in the bigger 4.7-litre as found in the SS version. Drive one of these today and expect the continual sound of low whistles when you drive past. With its rakish cabin with five central clocks set into the dashboard, and a long bonnet that rises and falls under acceleration, this is a most beautiful car. When considering one, ensure it has a fully documented history detailing the chassis, bodywork and engine maintenance from new. Opt for the 1969 version with the four Weber 42 DCNF carburettors as it will prove easier to maintain. It is worth locating as well an example of the car with ZF power-assisted steering, which is helpful when handling such a large car at low speeds. Ubiquity is unlikely to be a considerable concern as Maserati made just 779 examples of the standard car and only 425 of the SS model. The sensational and very expensive Spyder is even rarer, with 125 produced. Expect to pay more than £200,000 for a good Ghibli coupé and nearer £300,000 for a pristine one.

Perhaps you want to take your classic passion onto the track? The official Alfa Romeo 1750 GTA cars were built by Autodelta at Settimo Milanese, which had been absorbed into Alfa as its official racing manufacturer in the ’60s. It was powered by a 1,985cc four-cylinder, twin-spark indirect-injection Spica setup that pushed out 210hp at 7,500rpm and reached 230kmph flat out. The little racer weighed just 940kg and was a progression of the GTA model. At full-bore revs the GTAm snarls and barks like a cornered wild animal. It is easy to differentiate the car from the GTA version as it added chunkier wheel arches riveted to the steel body for the fatter racing tyres. Only 40 genuine GTAm cars were produced and would exchange hands for sky-high amounts of money, but rebuilt examples offer a good bridge for track racing at under £100,000. If indisputable provenance and history are essential to you, an original Autodelta-built Alfa Romeo GTAm would be a singularly prized possession. 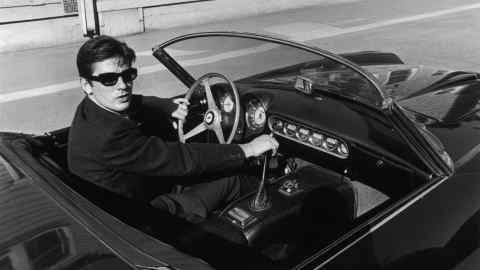 “Be as pragmatic as possible with buying,” recommends Max Girardo, the UK- and Turin-based authority on sourcing cars for global clients. Girardo worked for a decade with RM Sotheby’s as principal auctioneer and also as its head of European operations before establishing his own brokerage for classic cars – Girardo & Co in 2016. Girardo has seen rarities changing hands for colossal amounts of money at auction. Yet his advice is encouragingly egalitarian. “Always buy the best you can afford – whether it’s a Fiat 500 or a Ferrari California Spyder.” As to allowing your heart to influence your head, he’s a little bit more circumspect than Tyrrell. “Never get emotional about it,” he says. “You may have wanted a Fiat Dino in blue and rush in to buy it, only then to find it has a knock in the engine or it doesn’t run.”

I ask him what’s hot in the market now. “The biggest movement in the market is 1990s and 2000s cars. A Renault Clio Williams could be the car you wanted when you were 18 with a new licence and couldn’t afford one.” Perhaps unsurprisingly, he also points to Ferrari as a perennial investment favourite. “Ferrari is an aspirational brand. You’ll even get your money back on a Ferrari 348, while a 599 Fiorano or a 612 will not go down in value. The hottest ticket now is modern supercars – a Ferrari Enzo or Porsche Carrera GT, as everyone wants one.”

Girardo points to why now might be a good time to hunt down your dream classic. Fears of a recession with rising interest rates are holding prices firm for now. “The market is super-stable,” he says. “Prices are not going up but steady.”