Intel ultimately submitted their ARC A750 and A770 for review. In this article, we’ll have a peek at the A770. The new graphics card from Intel positions itself in a mainstream segment slightly north of the Radeon RX 6600 and GeForce RTX 3060.

It’s been a rough launch for Intel. Initially only releasing slower A380 SKUs in the Asia region, then with the launch of the ARC A770 Intel immediately ran into low volume availability issues. Next to that, many software issues have been plaguing and trailing the hardware releases. One of the reasons for this late review is simple, Intel did not have enough sample kits. So predominantly YouTubers got priority over the more technical media, with exemptions here and there. The good news is that ever since its launch, Intel drivers have improved further in a positive manner. We found the ARC A700 series to offer a reasonably stable platform, with performance numbers that excel in DX12 games but remain dim in DX11 games.

As you might have noticed, the A770 was launched in two different versions: 8GB of memory and 16GB. The A770 Limited Edition we are testing costs $350, while the regular 8GB version costs $330. Then there is the A750, which is a bit smaller and will cost $290.These are MSRPs though, we can’t find these prices anywhere at any retailer. In the USA you might have luck finding one at 399 USD; however, if you can find one here in the EU, you’re down for almost 500 EUR. For something mainstream in this performance range, that’s too much. 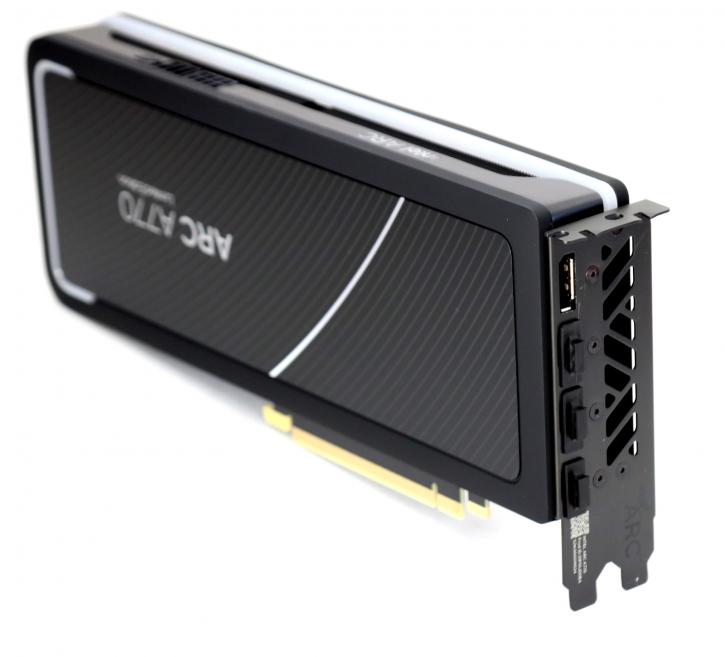 Once you first lay your eyes on it, you have to admit it, Intel did it right as that is a nice-looking card. The A770 has 32 Xe cores, 32 ray tracing units, a frequency of 2100 MHz, and a maximum power delivery rated at 225 watts. It is Raytracing compatible, with pretty strong 1st generation RT cores. The 16GB version has a memory bandwidth of up to 560 GB/s, while the 8GB version has half as much VRAM and a 9% lower memory bandwidth because it uses 16 Gbps GDDR6 instead of 17.5 Gbps GDDR6. The A750 has fewer cores and ray tracing units at 28, 50 MHz less operating frequency, and 8GB of VRAM with the same 512 GB/s memory bandwidth at 225w total board power rating. We should also point out that all models have a memory bus that is 256 bits wide, supports PCIe 4.0 x16, and need an 8-pin and 6-pin power input.

Keep in mind that these cards are highly dependent on Resize BAR functionality; ergo if you drop in an Intel ARC card, then your PC should not be older than a few years. Update your motherboard BIOS with the latest firmware and enable it. If not, it’ll work, but your performance will drop significantly. Arc A770 and A750 need a CPU from Intel’s 10th generation or AMD’s Ryzen 3000 or later. Arc Alchemist cards benefit greatly from Resizable BAR, which is only available on processors made in the last few generations. The cards will work with older CPUs, but the performance will be much worse if ReBAR is turned off. We did not retest my whole benchmark suite because we could see the differences after just a few games sometimes performance dropped by 25% Right, these are the most important specs, for this review, we will be using Intel reference cards, also dubbed Limited edition, and in our case we even had to peel of engineering samples stickers.

Intel ARC A770 review
Intel finally submitted their ARC A750 and A770 for review. In this article, we’ll have a peek at the A770. The new graphics card from intel positions itself in a mainstream segment slightly north of…