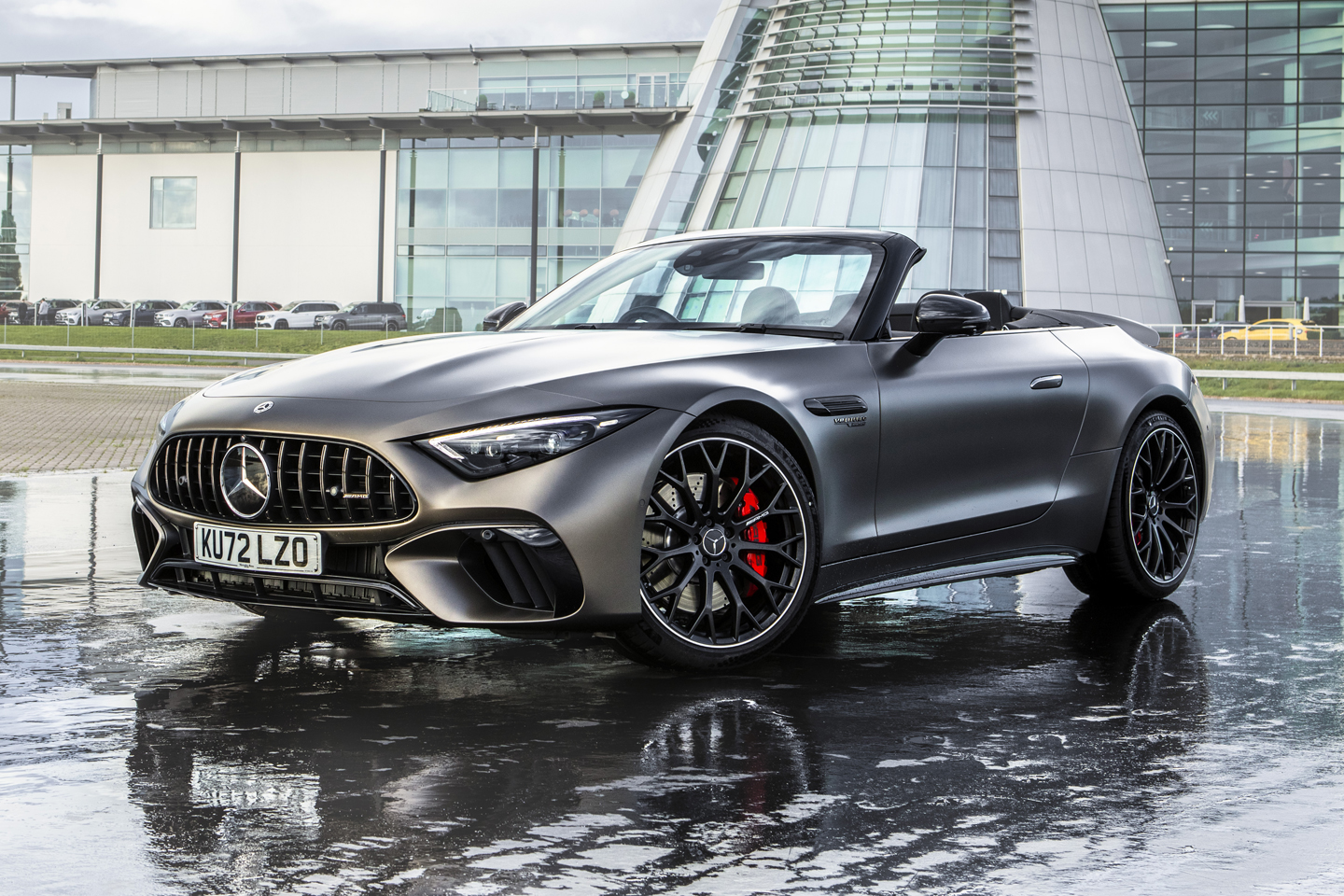 ‘Icon’. Now that’s a word that gets bandied about a lot in automotive circles. It’s often used to describe something that’s as iconic as a pickle jar because, well, marketing departments; they’re always so desperate to create a story and sell us a legend. The Mercedes SL is a legend, though. No doubt about that, and an enduring one, too. So for once, I don’t begrudge Mercedes using that word 20 times throughout the latest SL’s press release.

The SL has been through many variations. The original W194 300 ‘Super Light’ arrived in 1952 and became a successful road racer. The Gullwing that followed is undeniably iconic – viewed by many critics as not simply a car but automotive art. The Pagoda is my favourite, though, and by a long way because of its design simplicity, although the clean lines of the R107 aren’t far behind it. The R129, meanwhile, was an engineering feat like no other. A car that was ten years in the making by the time it was launched and represented Mercedes in its pomp: innovative, classy and engineering-led. All of those models are mentioned in the SL’s press pack, but there’s no mention of anything post-R129. Coincidence?

I don’t know, but for some, the SL started to lose its way from the late 90s onwards. Firstly, the quality went south, and the designs became more and more ungainly. It’s hard to argue that the R129 was super lightweight, although that was down to its Panzer-esque build, and it still managed to be pretty with it. But the last iterations, with their frumpy overhangs and fat bottoms, looked heavy and ungainly. So is the latest SL a return to form? Is it one to mention alongside the greats? 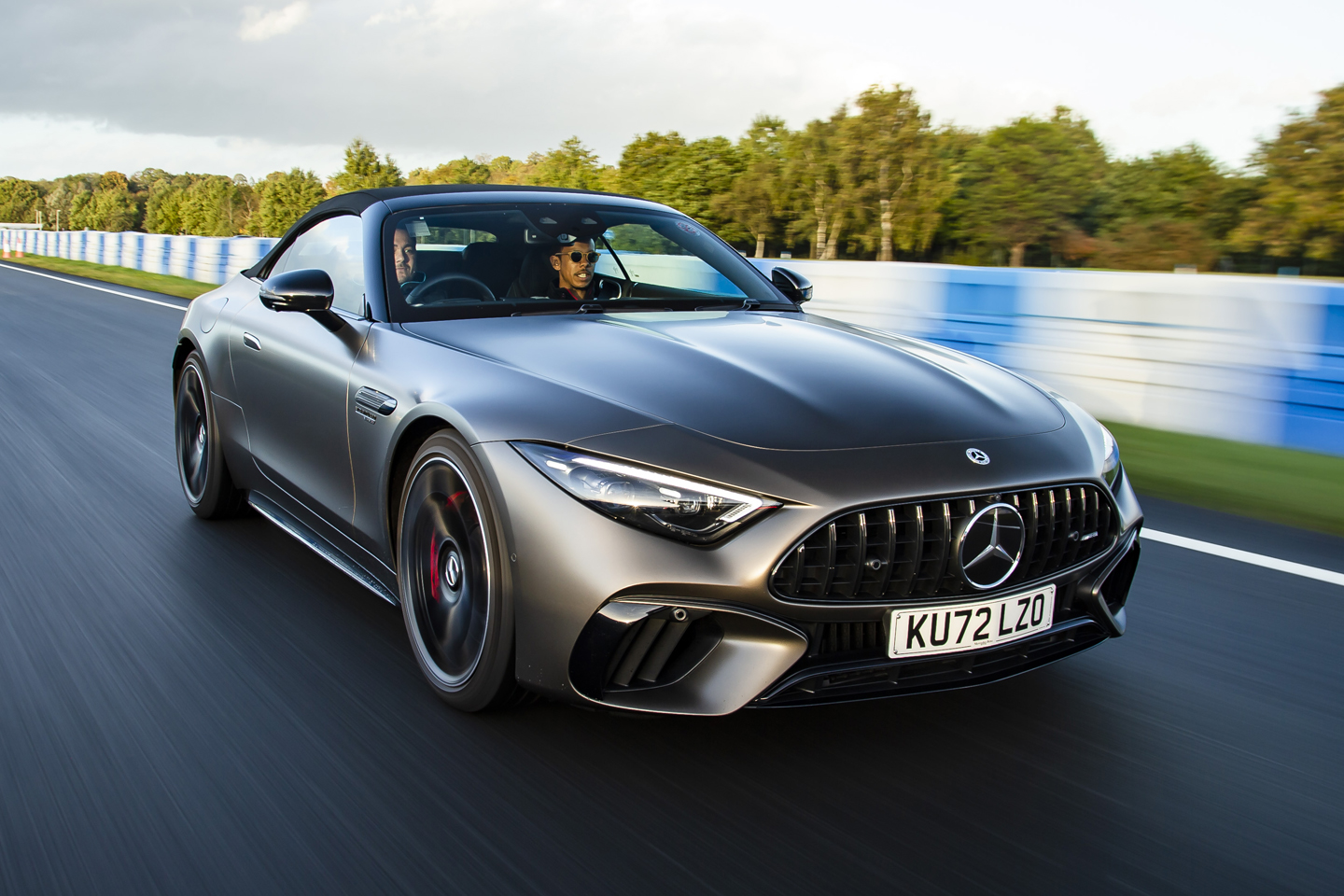 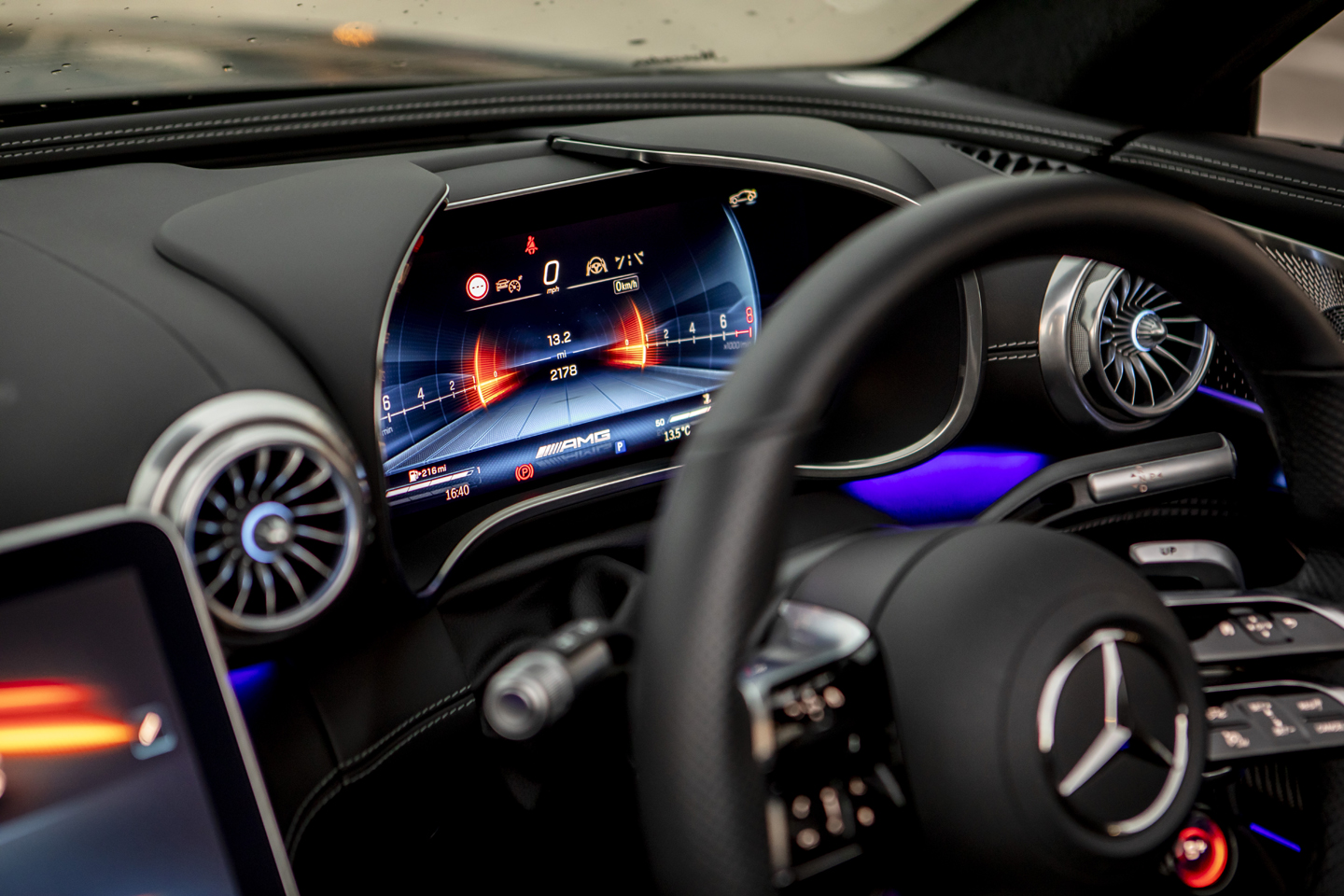 Well, Mercedes makes much of this being a car that treads the line between grand tourer and sports car. It’s also far from super light, mind, with the SL 55 coming in at a smidge under two tonnes, yet from the outside it hides that well. The design is neater, tauter and more flowing than the last one. To my eyes, it’s the most striking SL there’s been for a long while. It would’ve been even heavier had Mercedes stuck with the metal folding roof, but that’s ditched in favour of a soft top, and in an effort to trim as much fat as possible the structure is a mix of steel, aluminium, magnesium and fibre composites. The bare shell, we’re told, weighs 270kg. And it’s stiffer, naturally, with torsional rigidity said to be improved by 18 per cent.

Inside, it feels sportier than ever. You sit low, with the high dashboard and window lines cocooning you, and the sense of feeling hemmed in (in a good way) is amplified by the fat transmission tunnel that funnels out to accommodate the bell housing below. That, by the way, contains a wet clutch rather than a torque converter for the nine-speed MCT gearbox twinned with AMG’s familiar 4.0-litre V8. Anyway, it might feel on the snug side but it’s big enough to accommodate me, and I am all legs and arms, plus the driving position is spot on. The steering wheel, seat and pedals are where you want them for comfort and convenience, and those AMG chairs might be firm, but boy are they supportive.

There’s more good stuff, too. Smart carbon fibre trim, leather and Alcantara all add up to a high-end finish, and overall it’s screwed together like a Mercedes should be. Well, other than the lightweight turbine vents and the seat-adjuster panels on the doors, which flex when you press them. Nevertheless, it all stacks up to a serious-feeling car, which is diminished only slightly when you catch sight of the gamer-style graphics on the screens. Still, it’s eye catching, certainly showrooms well and the screens are ultra-high definition. The main one for the infotainment is 11.9 inches and orientated in portrait, in a similar vein to the C-Class’s, but in the SL you can alter its angle to avoid glare when the roof is open. It’s running the latest version of MBUX, and having been critical of the software in the EQS this seems much more responsive – only the pinch and zoom for the map came across as a bit sluggish. 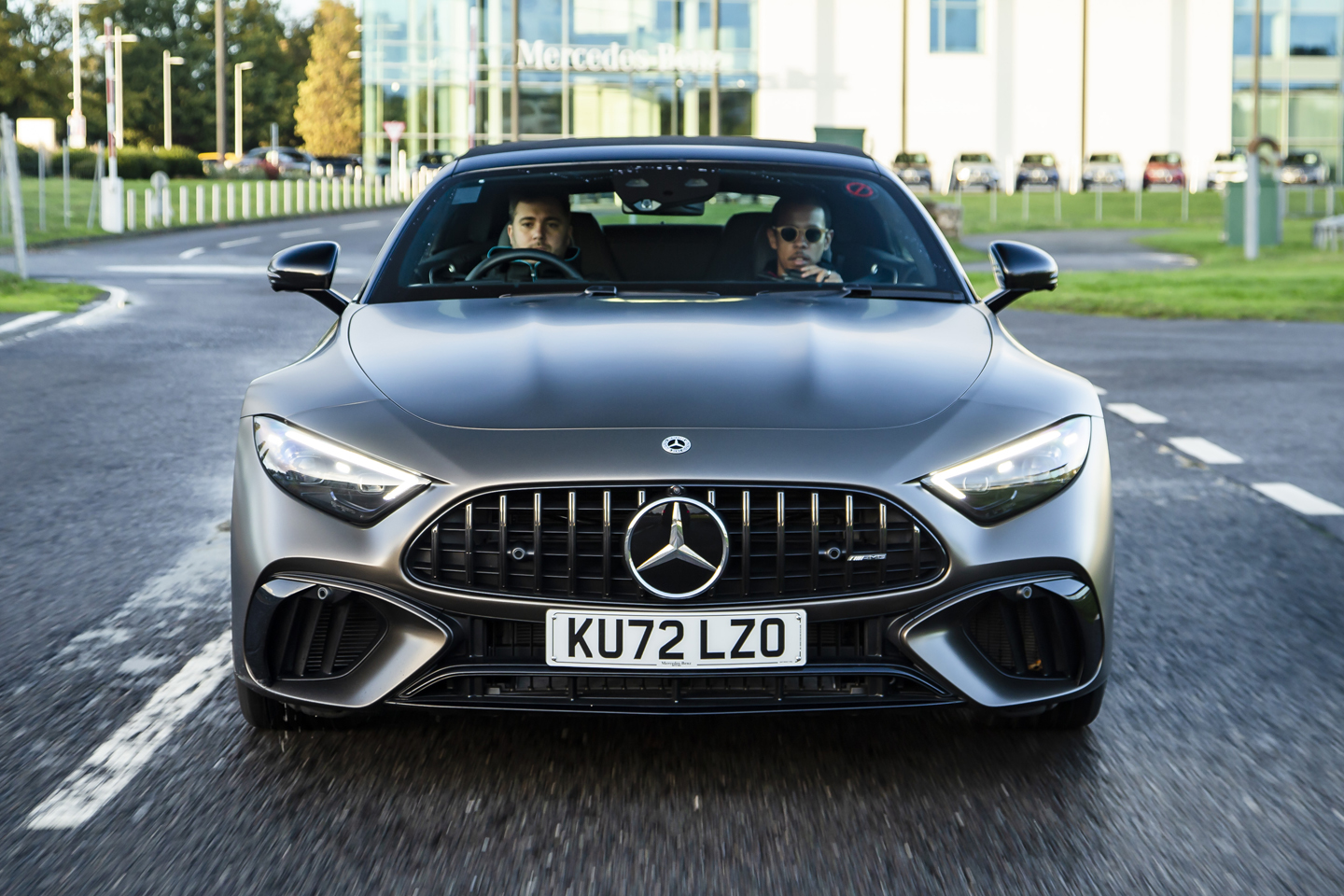 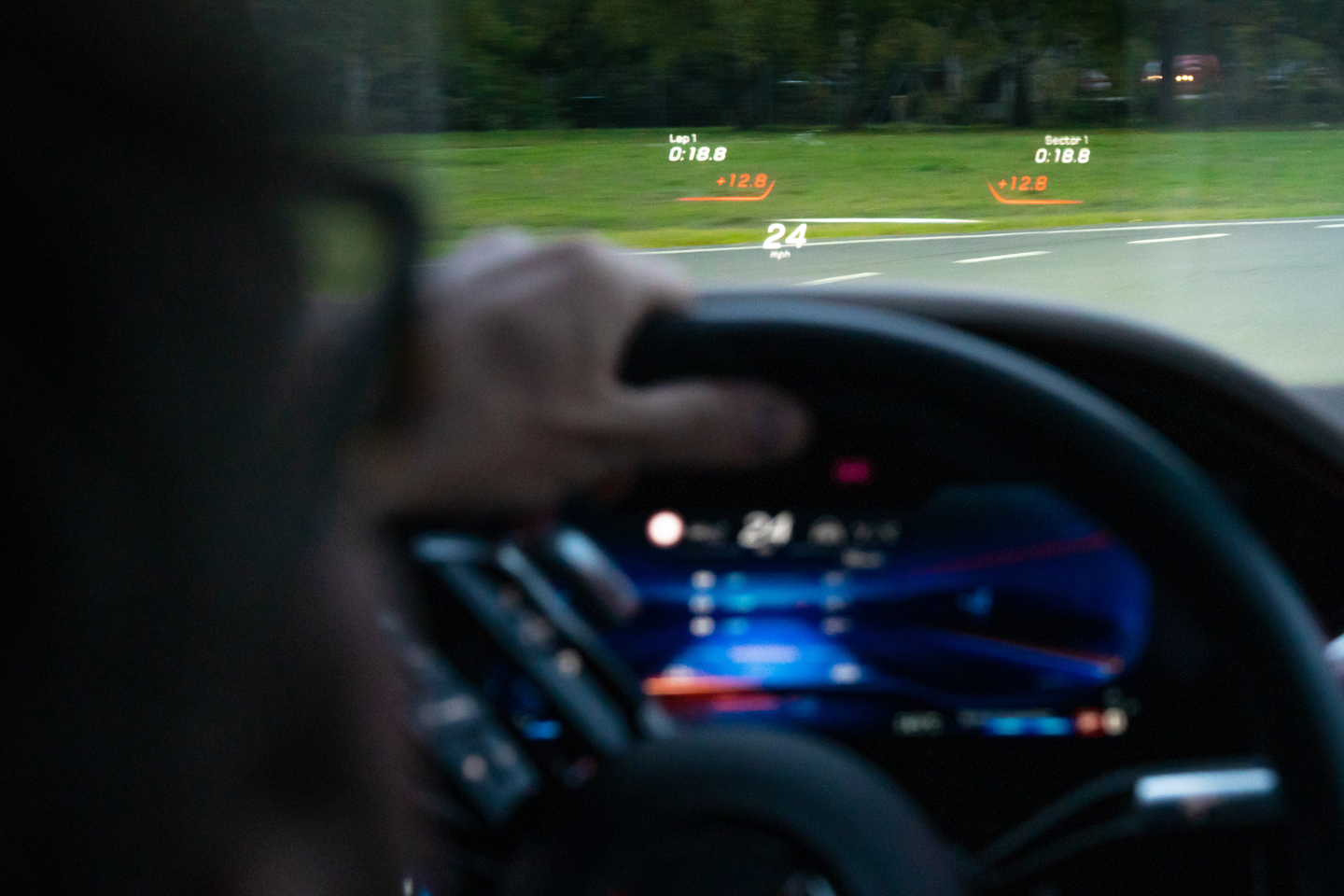 Right, so Mercedes has told us it’s sportier and, for sure, that comes across when you absorb its charms within and without, but how does it drive? Well, Mercedes wasn’t running scared: I didn’t even drive the SL out on the road. Instead, I had a few laps around its handling circuit at Mercedes-Benz World. Bearing in mind this is a tight and twisty affair – which you wouldn’t think would suit a two-tonne drop top – the SL acquitted itself well. Very well, actually. Off the line, AMG’s glorious 4.0-litre V8 thunders away with its endearing dogs of war musicality, and having 476hp and 516lb ft to flex in AMG 55 trim, it’s certainly a weapon down the straights. We’re used to that sort of caper, though, which isn’t to say it’s boring – it really isn’t – but it’s when the straight ends and the first corner appears that the SL shows its dynamic mettle, and the differences between new and old SL come into focus.

The first job is to step hard on the brakes, and the 390mm discs and six-piston calipers produce a mighty stopping force. The SL sheds speed with ease. At the same time, it’s easy to predict the pedal pressure required, and bleed it off surely as you start to turn in. And the car wants to turn in. The front axle is alert and the wheelbase foreshortened by the standard rear-wheel steering, which makes the car feel nimble and willing to rotate. And thanks to the standard AMG Ride Control, when you crank the dampers up to Sport + you’re not worrying about the inertia as the lateral load transitions from one side to the other. Put simply, it’s stable and assured.

No doubt some of that comes from the suspension’s design and set-up rather than simply ramping up the damping rate. Delve into the specs and there’s clearly been some effort extended here, with talk of trimming the unsrpung mass by using forged aluminium suspension links, steering knuckles and hub carriers. And the SL rides on steel springs, not air bags, and a new tempering process has reduced the weight of those as well – without, we’re told, impinging on performance. For the first time on a production Mercedes-AMG there’s even a five-link front suspension design to match the multi-link set-up at the rear. That’s all about keeping the camber and track tightly controlled as the lateral loads ramp up. 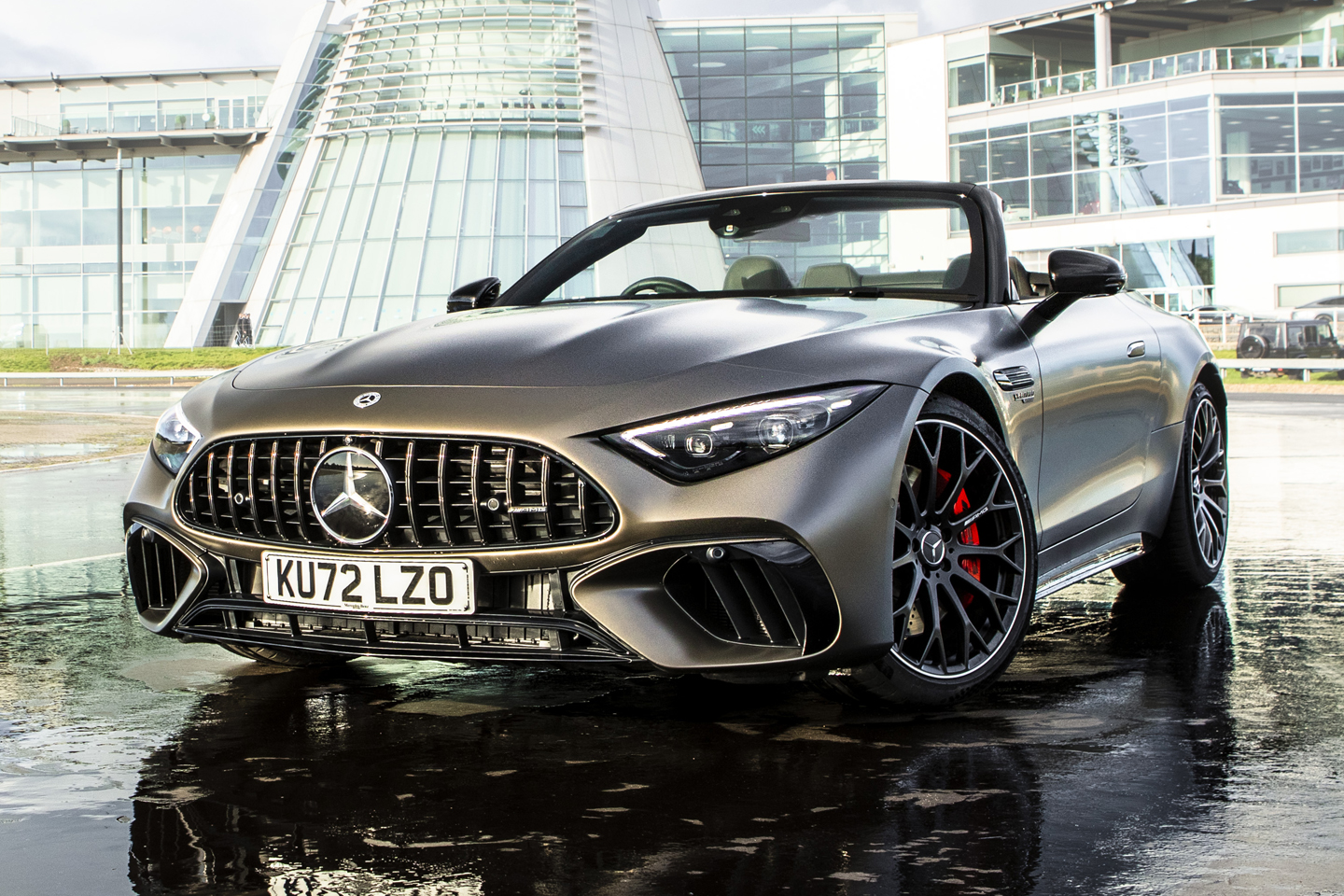 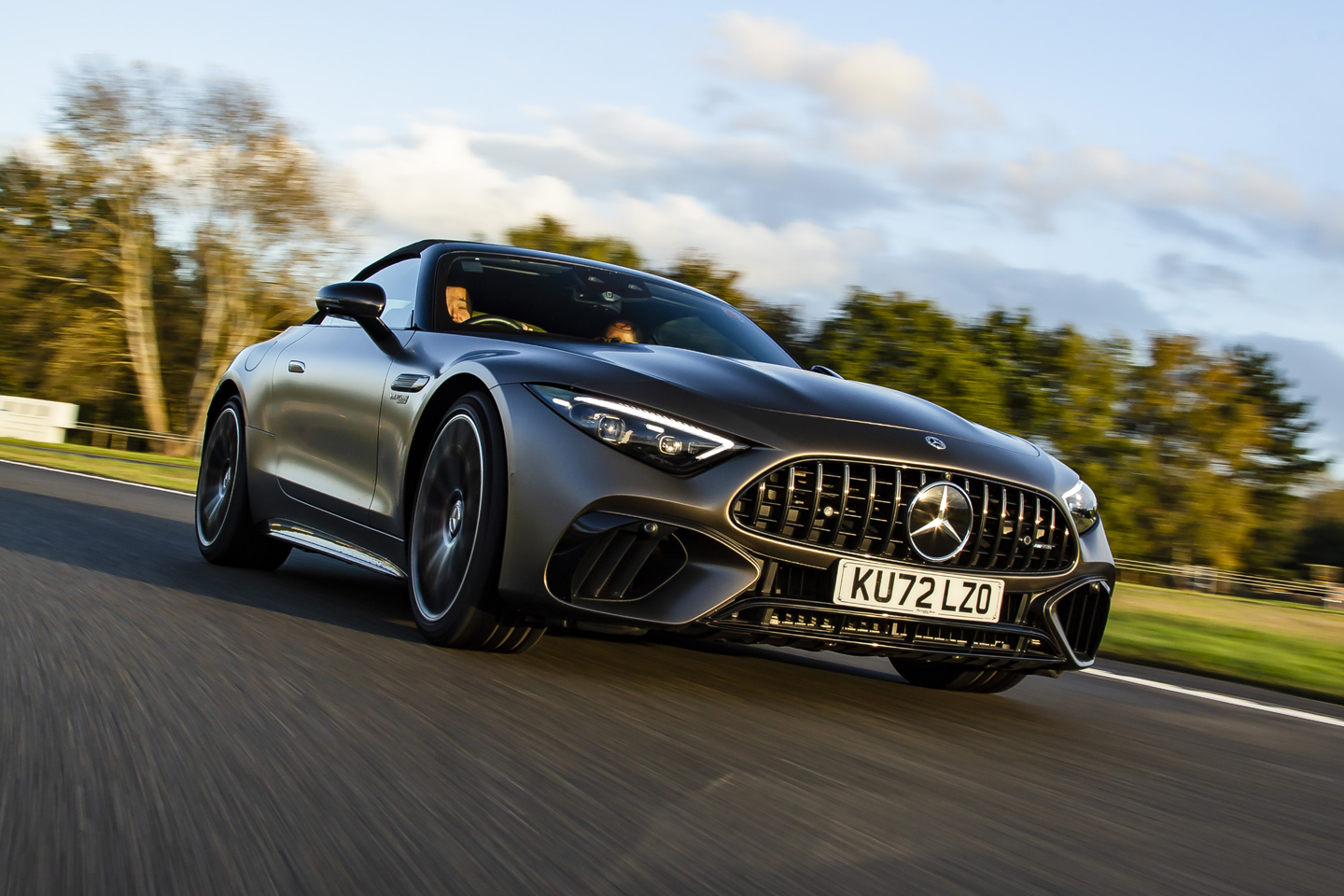 The steering isn’t animated like a 911’s, but it doesn’t leave you guessing. When you start to turn in there’s enough heft to tell you what’s going on, and as the loads build it’s easy to sense how much grip the front tyres are mustering. My only issue was how the steering is geared. Initially, it’s predictable and linear, but there’s a definite point when it switches up a gear and suddenly you’re heading towards the apex way sooner than intended. Whether that’s something you can dial into, I don’t know, because I didn’t have enough laps to find out.

I did a couple of slower laps, just to gain as much insight as possible bearing in mind the lack of road miles. I can tell you, for instance, that at 70-80mph there’s quite a lot of wind noise with the roof up from the window seal next to my ear. On the plus side, when you drop the roof – which takes 15 seconds and is executed from a swipe icon on the touch screen, meaning yet another physical button has disappeared – it’s not that blustery at all. You just get a lot more bluster from the engine, so that’s two big ticks. Is the ride too hard? I haven’t got the foggiest. I did try the Comfort mode but as the handling course isn’t representatively coarse, not like a real-world road at any rate, I’m not making any definite statements beyond it felt fine from what I’ve experienced thus far.

And overall, that experience has left me impressed. I like the new SL for all the reasons I didn’t much like the last one. It’s prettier and feels smarter inside, too, and it’s nice to sit in a Mercedes that seems well screwed together. In that sense, it’s aping the grand SLs of old, like the R107 and R129, but the way it drives – the way it feels light and nimble, certainly brings to mind the earlier models. I’m not quite ready to sign off with ‘The SL lives up to its iconic status’ – I’d need a more complete road test to go that far, and that’s still to come. But from what I’ve seen and heard so far, it doesn’t appear to let the side down.